Have you ever been somewhere that was so quaint you could hardly stand it? Last spring I grabbed a friend and her two kids, called my kids in sick, and loaded up for a day out in Commerce, Texas. What’s in Commerce, Texas?

As someone with an early childhood education background this museum pretty much nailed just about everything on the head. Specifically designed for children through 3rd grade, this venue was perfect for our 5 children to explore for the day. 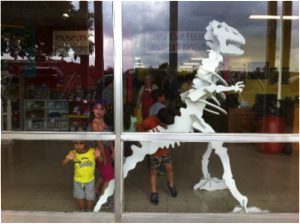 I had called ahead to spend some time with the director, Shirlene, and a board member Wyman, and they generously gave of their time and guidance as my friend and our children explored. I was told of a large group of incoming preschoolers from surrounding areas, 100 in all, who were going to be there until noon. While we were talking a bell rang. The large group split into two, each group going to an opposite end of the building for a lesson in a particular area of the museum lead by a volunteer staff member. The children eagerly gathered and patiently sat through a brief lesson and were then allowed to milk a model cow on one side, and experiment with magnets on the other. Meanwhile a push train was going round in circles, the dress-up stage was in use, the bubble room was getting soaked, and a rocket ship was preparing for takeoff.

What I learned from the first half of our visit was that you can make anything out of anything. Many of the exhibits at the Northeast Texas Children’s Museum were either built by volunteers, handed down from other museums, or reclaimed from businesses who no longer needed the fixtures. Board members traveled 100 miles or more to gather materials from donors only to bring them back to Commerce to assemble or reassemble them with love for their precious museum. I learned that it is that type of dedication to the cause that is what finally opened doors for their organization.

After a picnic lunch outdoors in the greenbelt area (we’d packed ahead of time; there is no food service in this self-sustaining museum) we went back in for round two. Our children now had the entire place to themselves! What fun they had flying a plane, fishing, playing judge in the courtroom, serving dinner in the restaurant, doctoring up some babies, buying groceries, having a few rounds of checkers and dominoes, and a putting on a few puppet shows. 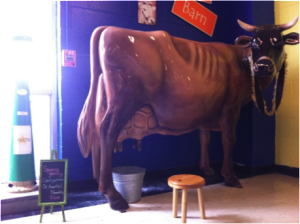 It didn’t take a fortune to start this museum, just a lot of elbow grease. As the saying goes, I’ve got a lot more time than I have money. This certainly was the case for our friends in Commerce. All the homemade exhibits were beyond charming, giving new life to old items, repurposing fabrics and PVC pipe, refreshing with new paint. It was a maker’s paradise. We can totally do this in Denton.
I can’t express how inspired I was as we drove home that day. It was probably the best hooky day ever.