Several times each year, and particularly since conceiving Explorium Denton almost three years ago, I take my family to a children’s museum or science museum to do what I like to call “Field Research.” It’s awesome, because

I can count it as an educational experience, build my wish list for our emerging museum, and meet new people who take a genuine interest in our budding project. 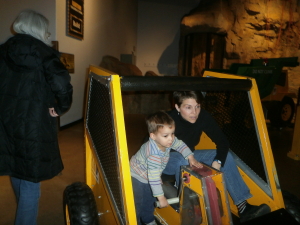 Our travels have led us as close as Frisco, Texas, and as far as Indianapolis, Indiana. Wherever we go, be it for a planned vacation or a hooky day, I plan our trip to include a museum stop. I snap lots of pictures, record video clips, and write tons of notes, all with the hope that our place will be as awesome as the places we’ve visited.
Today, I highlight the world’s largest children’s museum, the Children’s Museum of Indianapolis. My dad and his family live nearby, and we actually drove there from Denton last March. It was incredible, and worth more than the half-day we spent there. 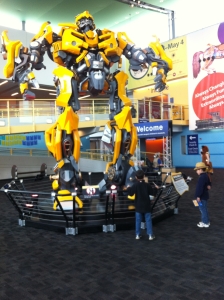 To say the Indianapolis Children’s Museum is overwhelming is an understatement. We were greeted by dinosaurs which appeared to be bursting out of the façade of the building, then subsequently greeted indoors by a three-story “Bumblebee” Transformer. Picture taking commenced, and we slowly moved toward and ancient China exhibit where we rebuilt puzzle models of buried terra cotta warriors. The construction zone was so enthralling I dare say it made me think I may have been a bulldozer driver in a past life. At one point we had to split up to cover all the things we wanted to see. The Stories section revealed historically significant pictorials. A giant carousel provided thrilling entertainment for my then two-year-old, as did the phenomenal Playscape area for early childhood (incidentally, this area featured the most amazing nursing mom’s area…it was incredible. AND this area also featured a thoroughly modern art studio, music room, and other fascinating attention-grabbers). Top this all off with Chiluly art all over the museum, a real working steam engine, a plant lab, dressing up like a dinosaur egg, a REAL Indy race car, the water clock, toy museum, hall of mirrors, dress-up theatre, nature exhibit, a full service food court, and the countless things we did NOT get to see, and we were amazed, delighted, and exhausted. We left with little energy, full hearts, and one cranky toddler, but not before hitting the fabulous gift shop for some great souvenirs.
Seeing even a portion the world’s largest children’s museum was worth driving from Denton to the wilderness of southern Indiana, and from my dad’s cabin in the woods all the way into Indy. If Explorium Denton is even a fraction as cool as the Children’s Museum of Indianapolis, I will be one satisfied founder.
My next blog post will feature what we did along the way on our two-day drive to Indiana……stay tuned!
admin2017-05-22T16:52:19+00:00
Page load link
Go to Top