Earlier this year, our intern-turned-staffer Meghna Jayakumar took a trip to California, during which she braved the MOXI museum in Santa Barbara for the sake of Adventures in Field Research. This account was written entirely on her own dime and time. Check it out!

In a picturesque coastal city, on a quaint downtown street, sits The Wolf Museum of Exploration & Innovation, or The MOXI. The building has tall and inviting front windows, revealing a glimpse of colors and lights inside. I visited this museum as an observer, not a guest, because my younger cousins were, in their teenage-boy words, “too old to go to a kids’ museum.” I think they would have enjoyed it. Because it is not officially a children’s museum, there were guests of all ages. I saw at least two groups of college kids who all seemed like they were having as much fun as the youngsters, and I loved the atmosphere and energy of the space even by myself. (Shout out to museums that let me walk around for free because I’m from another museum!)

The museum space begins with a wide open lobby, and in the middle sits a globe. It looks like a world map at first glance, but it’s a heat map. There are stations around the globe where you can place your hands and other objects of different materials and the image will pop up in the middle of the globe in front of you. Push a button to snap a picture of the station, and the thermal image gets added to the rotating collection of pictures on the globe. 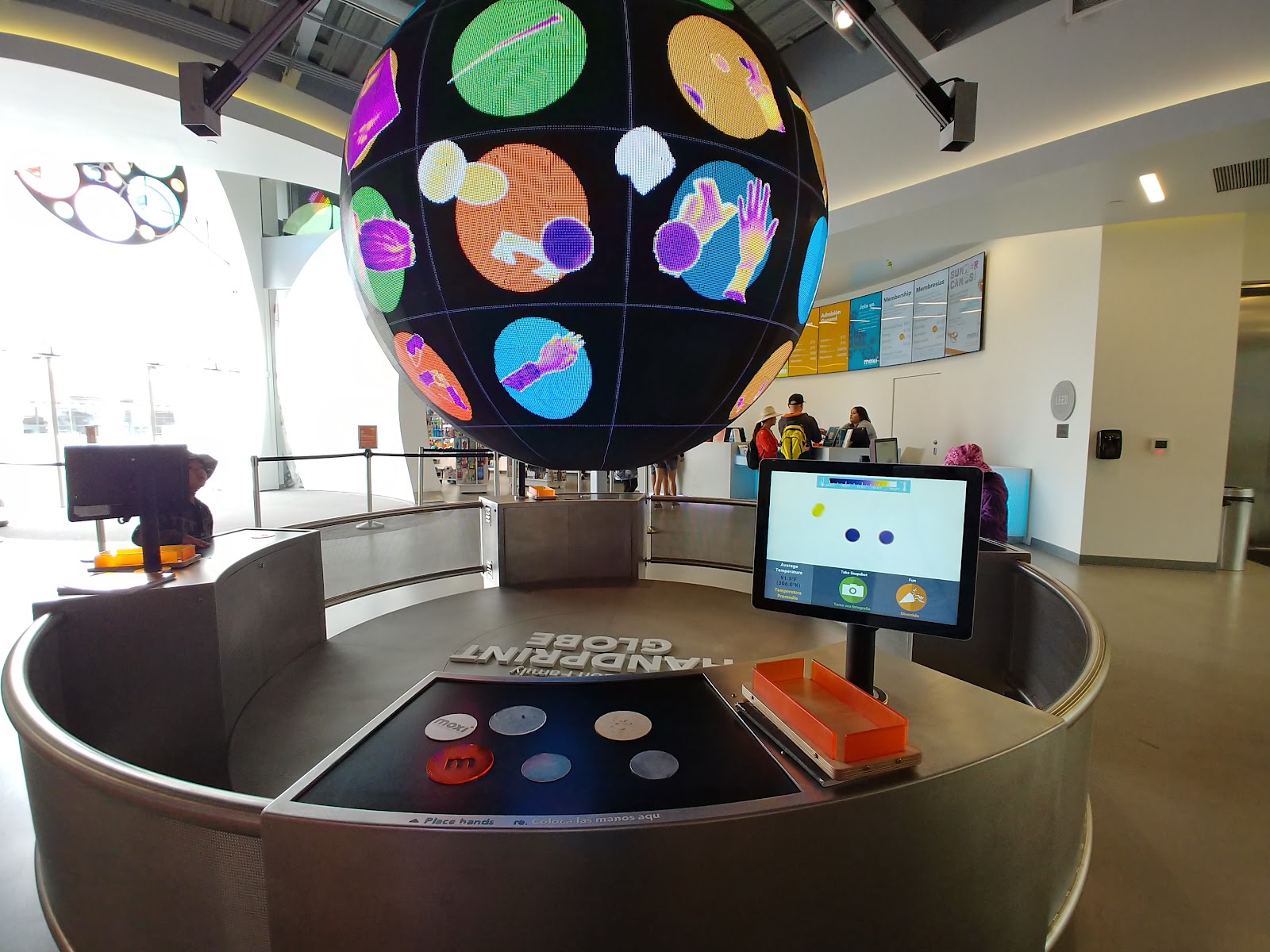 Along one wall of the lobby area is the Innovation Workshop, which housed tabletop materials inviting guests to design and create their own superhero masks, starting from templates and going through sequins, felt, and anything else you could think of to end with the perfect mask for your super-alter ego. This room, much like Explorium’s Make & Think tables, is a space where activities are switched out often.

Following the map to the next room, we see The Sound Track. The first thing you’ll notice is a giant guitar. The strings make real sounds and the capo can be moved up and down the fretboard to demonstrate how pitch works on a large scale. There are also demonstrations of pickups and amplifiers for people who want to go more in depth. Kids particularly liked that the guitar had a hole in the back to crawl into, and the insides were indeed designed like a real guitar. 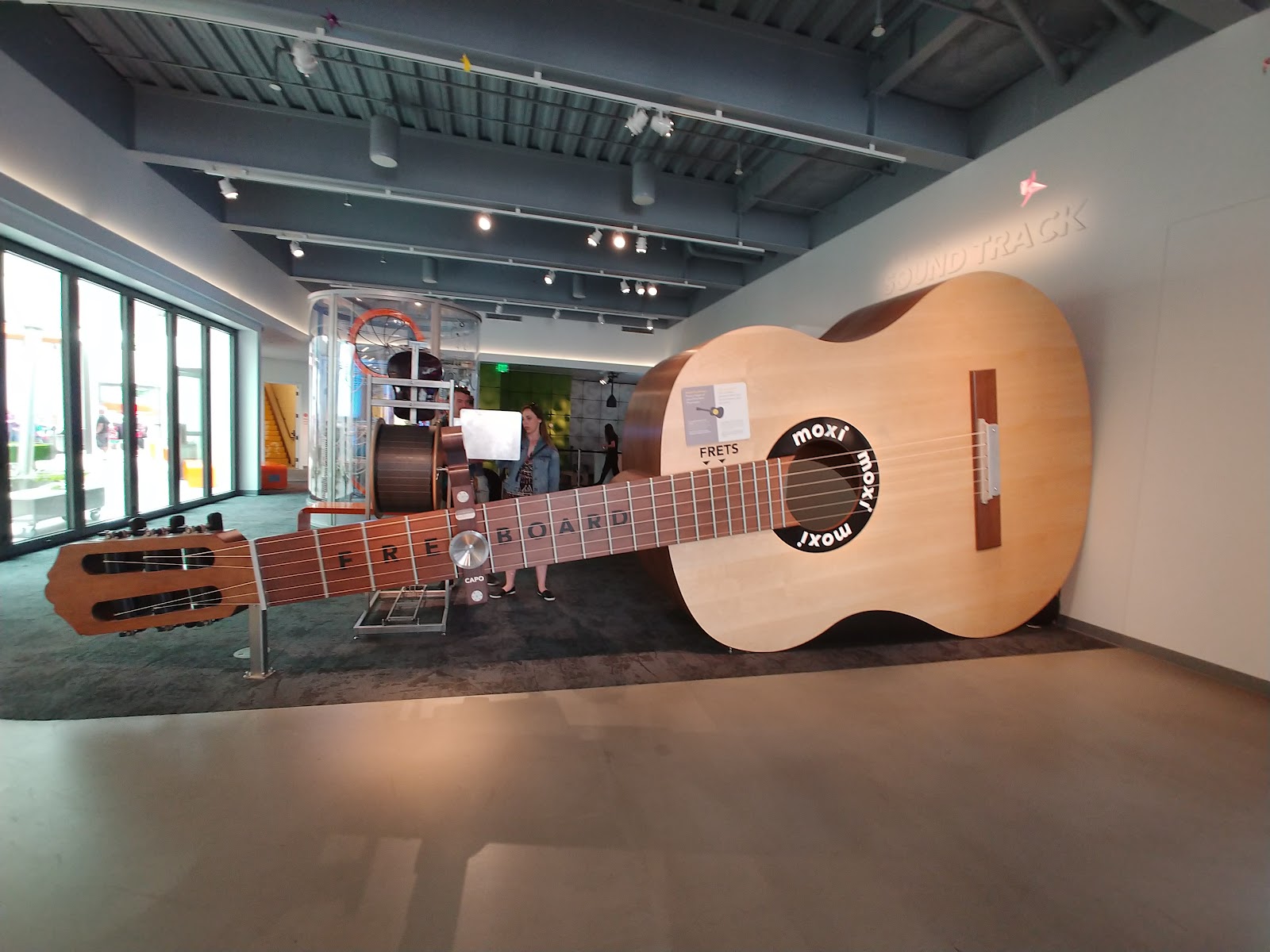 The most popular feature on The Sound Track was a Quiet Quest – a small soundproof hallway with rocks on the floor and a tool that measures how loud the room is. Kids would run across, and then tiptoe slowly, and then try to be as loud as possible. One group of aforementioned college kids was getting very competitive until one person decided to cheat the system and walk along the slightly elevated edges of the hall instead of on the rocks and all his friends got annoyed with him for cheating.

Other areas of The Sound Track include a Rube Goldberg-style sound machine and three Foley studios, each with a monitor that plays movie clips and has equipment and noise makers for guests to record their own sounds. There was a family in each room, and every child was banging on tables or drums. Kids get told to be quiet so often, this is a place they’re encouraged to be loud.

Adjacent to that room is an enclosed courtyard with a very creative donor wall, and many different types of larger building materials. There are wind machines, much like the one at Explorium, and a system of suction tubes that pull balls along them. The part that looks like an open ceiling is covered by semi-transparent glass, so you can see people walking on the roof above (where there are more exhibits). 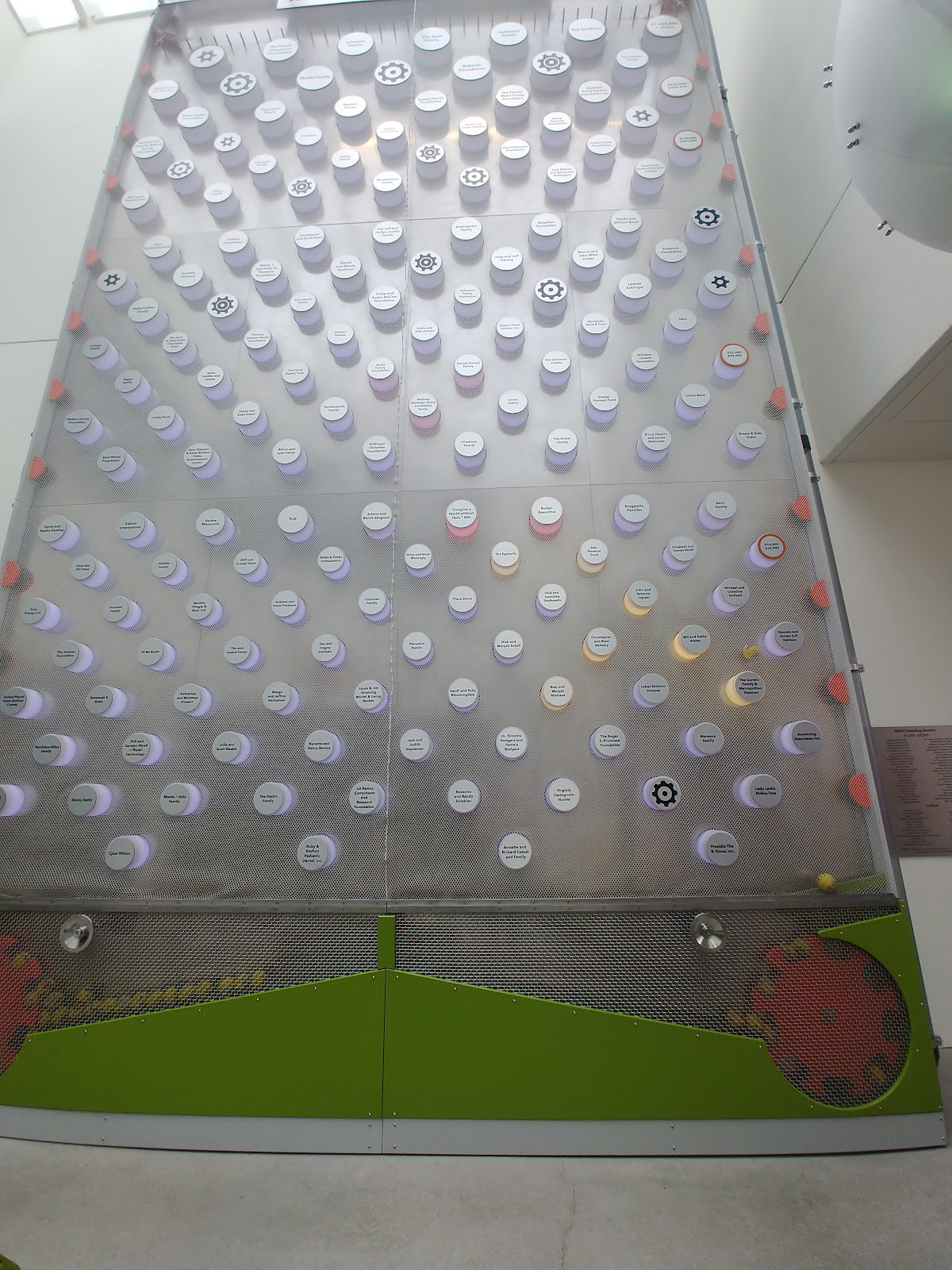 Back inside, the next room is The Light Track. The first thing, and possibly the most interesting thing, is a virtual reality station. When I was there, they had a kid sitting on a spinning chair wearing a VR headset, as spectators could see the image he was seeing on a separate tv screen. In a small room that I almost missed because it was tucked away, there is an interactive media theater where I scanned my fingerprint and it was turned into sound waves so I could hear it. There were no families in the room – I felt like it was a little high-tech for younger kids – but as someone who loves music, I found it fascinating. Past the VR area is an art studio with many monitors for people to draw with their hands, as well as a giant Lite Brite wall and a light table. Further along, there is an action wall where guests can get from one end to the other in whatever way they want – walking, jumping, dancing – and cameras track the movements and play them on monitors as bursts of color, showing how animators block movements. 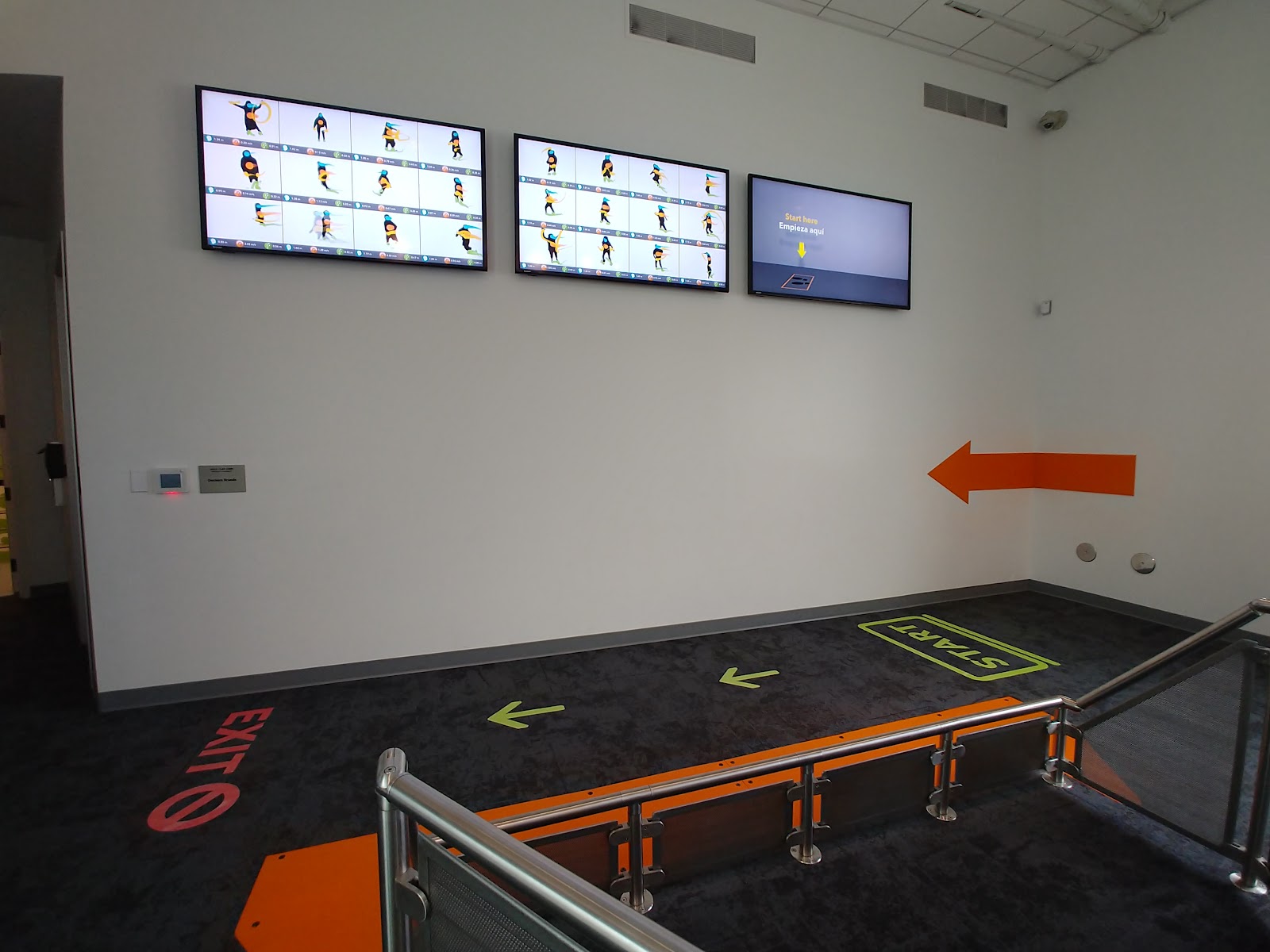 One floor up, there is The Speed Track. Two sisters were staring each other in the eyes with their foreheads pressed onto a contraption called Mind Ball, where the goal is to think hard enough to push a a small metal ball all the way to the other person’s side. The main attraction in the room is a giant wooden race track with high speed cameras that track exactly which wooden car wins each race, as well as tracking the exact speed of each car. Also in that room is a marble wall, and my favorite things ever: Keva planks. For those who don’t know, those are wooden planks with very specific dimensions that are wonderful for amateur architecting. I was not the only person enjoying these blocks; a boy was narrating his building techniques to his mom, who he deemed his “plank retriever.”

The final piece of the museum is the Sky Garden: a rooftop area with exhibits and space to sit and watch the city from above. The most exciting feature for the kids up here is a water play sculpture, but the day I visited was cloudy and breezy so parents were trying their hardest to keep their kids dry. Any exhibits that need electricity on the roof are powered by solar panels. There is a variation on a pipe piano, as well as an “inside out” real piano, where instead of piano keys, there are large guitar picks and guests can pluck the strings inside the body. To top it all off, there is a lookout tower with many different types of scopes. A regular telescope sits in the center, surrounded by a thermal camera, a periscope, a lidar scope, and a “teleidoscope” which makes the world look like a kaleidoscope wherever it’s pointed. The view from the roof is gorgeous even under clouds, with mountains on one side and the beach within walking distance on the other. 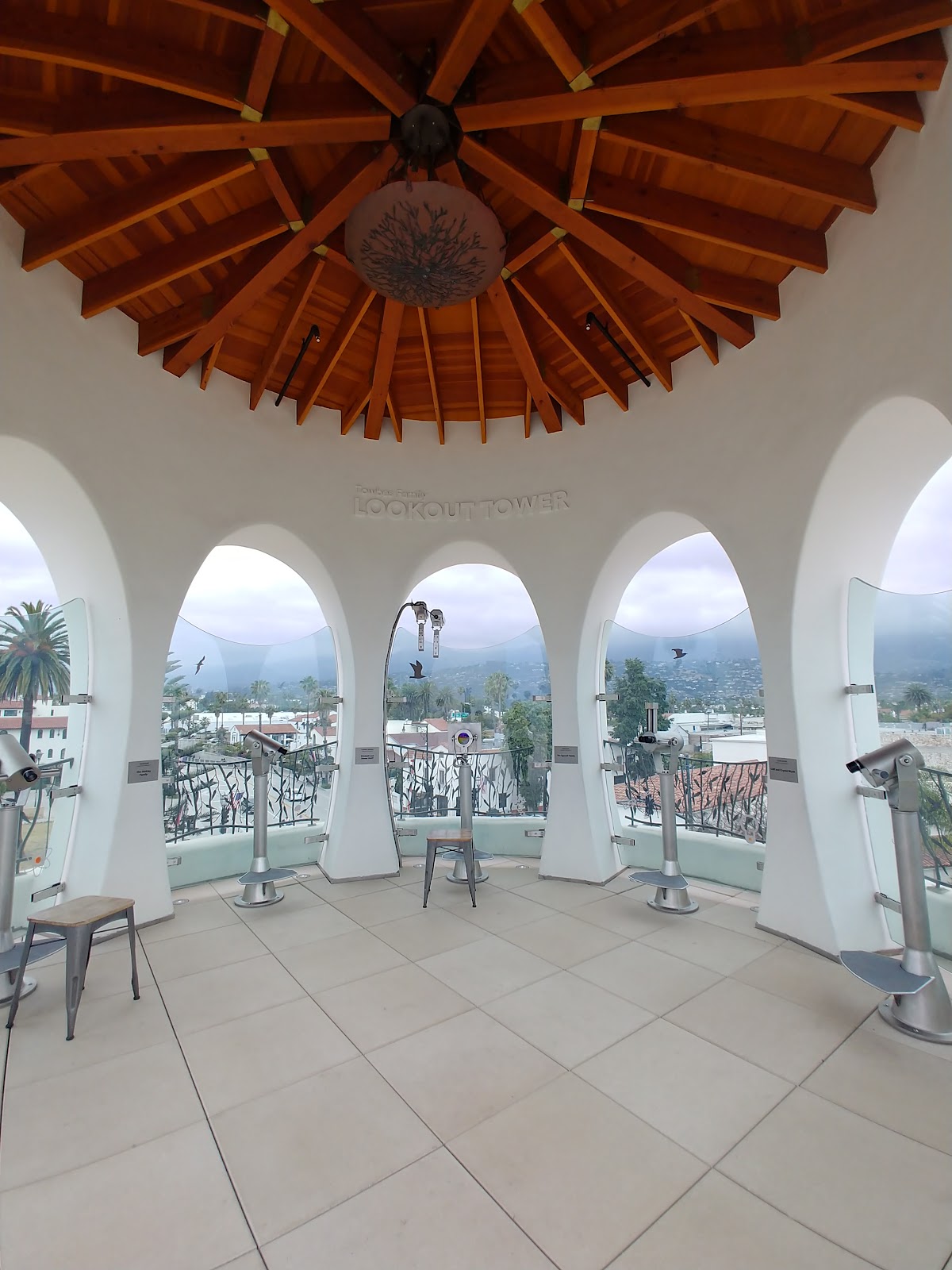 I would recommend The MOXI to people of all ages. From established intellectuals to those still learning, there is always more to discover, and this museum illustrates that wonderfully.