My kiddos and I had the pleasure of visiting the Thinkery in Austin. What a treat this place was! I was smarter this time around in that I decided to visit during the week instead of the weekend like I did at the DoSeum. I looked online at their website and noticed that they hold a “baby boomers” time slot from 9am-12pm every Monday, and they open up the museum just for the 0-3year olds. Because I have a 14 month old, I decided this would be something we should try. The tickets were half price during this time (only $4.50 a piece!), so I was pretty excited about that! I also purchased general admission tickets for the 3 of us, as I wanted to stay longer than noon.

Upon arriving at Thinkery, we waited at the front for 9am to roll around and be checked in. To my surprise, the tickets that we purchased for the baby boomers were good for all day access! So the general admission tickets were refunded to us, and that made our trip even more affordable. Great idea for Thinkery! Not only do we get to have the museum all to ourselves with our younger friends, but we get to save some $$ as well.

As we walked in, the first exhibit that we came to was called “Innovator Workshop”. Wow, lots of cool things going on here! This area is very large and open and is filled with different tiny exhibits. You can build landscapes, paint on glass, build a craft at the craft station, there’s a simple machines wall, and so much more. We loved this area because there is simply so much to do!

As we ventured to the second floor, we came to a place called “Let’s Grow”. This area was geared towards younger children, and we spent a lot of time there! The theme of this exhibit was a farmers market. There was bin after bin of pretend fruits and vegetables, and a kitchen set up with real pots and pans for the children to “cook their meals”. There was a chicken coop with “fresh eggs”, and some puppet chickens to play with. In this same area, there was a rather large gated play area that was just for children 30 months and younger, but older siblings could come in if they played gentle. This smaller area had a garden theme as well, and there was even a sing-a-long with a Thinkery staff member.

Around the corner was a reading nook for children to come and hang out and read books. During our time, a story teller came and read 3 books to the children, all about astronauts and outer space. Down the hall was a really cool space called “Currents”. If you like water play, this is the exhibit to visit! This exhibit holds basically a huge water table where you can do different experiments to see how the water moves, hear the different sounds, and experience the different water pressures. This space was really wet, but Thinkery provides smocks, crocs, and hand dryers for the concerned parent.

The upstairs of Thinkery also has several classrooms used for different workshops that specialize in very specific science experiments and activities. For instance, one of the experiments held on this day was for chromatography. I was able to help Explorium with a chromatography exhibit this summer when I first started, so it was cool to see this was being done in other museums as well. Other exhibits that can take place may involve chemical reactions, engineering of instruments, and various other workshops. If you want to explore these workshops, they do cost extra so make sure to check out Thinkery’s website in advance.

The last space I will talk about is called “Our Backyard”. As you can imagine, this is located outside, and it was huge! The outdoor playground facility basically consists of ropes and nets and almost looks like a really big tree house of some sort. There is a small area off to the side with sand and different shovels for the children to explore, as well as a fountain area that children can play in. The Thinkery staff had two large bins with water out there and some smaller bath toys for the younger kids to enjoy. There are multiple large benches for the parents to sit on and watch their little monkeys climb for hours. I know I did! If you want to walk inside for a bit, and still be able to watch the kids play in the backyard, there is a sitting area with air conditioning and two vending machines that only sell healthy options. These vending machines were especially nice to see because I didn’t have to try to decide which typical vending machine junk food would be better for my kids to snack on before we had a meal. All the options were healthy and something you could find in a whole foods store!

What I learned from visiting Thinkery: variety, variety, variety! I think Thinkery goes a step further to ensure that there is a variety of events and activities to do while you are there with your children, whether it be the different workshops to experience, having scheduled story times, or children’s musicians that come in and play. There was a musician that came and played for about 20 minutes while we were there by the name of Staci Gray , and she was fantastic! I think Thinkery is very smart to schedule events throughout the day, because it literally made us want to stay longer so that we could experience everything. I know that if we didn’t have something else to look forward to later on in the day, we may not have stayed as long as we did. Oh who am I kidding…. Even after 5 hours, my daughter still didn’t want to leave this place!

If you are heading out to Austin this summer, be sure to check out Thinkery. You won’t be disappointed! 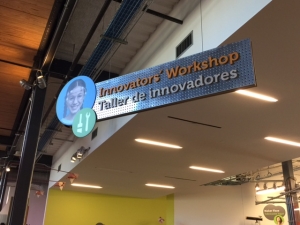 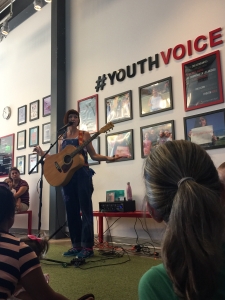 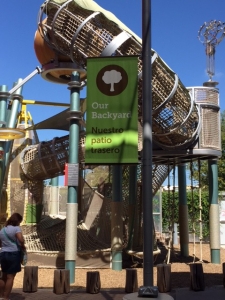